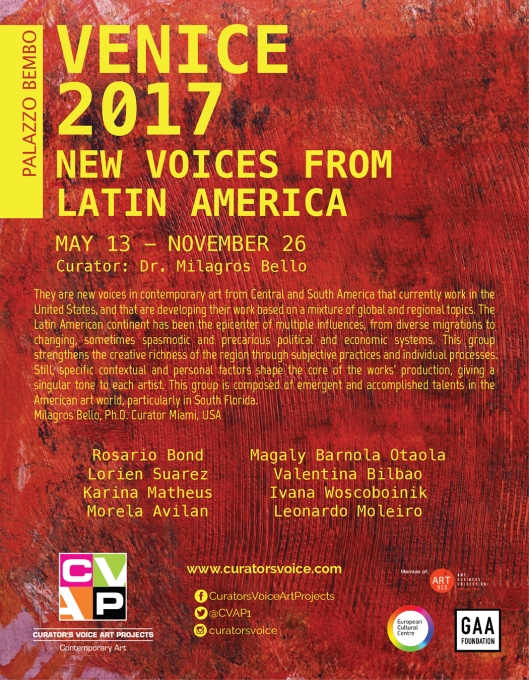 Rosario Bond, Miami/Dominican Republic
Based on an expressionistic, abstract current, Bond’s paintings are fictitious sets of natural environments in which gestural brushstrokes intermingle with drippings and strong contrasting color spots that morph into structured geometries, playing out between the rational and the emotional.
Lorien Suarez, Venezuela/San Diego
Suarez proposes a neo-geometric approach to her work, combining curvilinear lines with multiple circles and ovoid shapes. Vertiginous, colorful waves fall over one another in dynamic compositions with subtle resonances to imaginary fractals.
Valentina Bilbao, Miami/Venezuela
Bilbao creates pure palette knife paintings in explosive monochromatic, hued colors that resonate with acoustic and musical echoes. The artist spotlights with deep intensity poignant and expressive tones that elicit positive and bright responses.
Morela Avilan, Venezuela/Miami
Quoting Signac/ Seurat pointillism in contemporary terms, Avilan creates solar monochromatic paintings generated through overcrowded marks juxtaposed one over the other, in precise and mechanical circular spots.
Leonardo Moleiro, Miami
In a Post-Cubist, fragmented approach to his work, Moleiro creates a multi-dimensional, illusory reality of igneous effects closely correlated to the bright intensity of South Florida.
Magaly Barnola-Otaola, Miami
In a transaction between painting, color drawing, technology and photography, Barnola-Otaola reproduces old images of her works, re-inventing them through Adobe Illustrator and Photoshop into a final photograph in a frank allusion to the old modernist taboos of originality and reproduction. As an epic theme of femininity and nature, seduction is proposed in her works.
Karina Matheus, Miami
Matheus’ works combine primal gestures, strong brushstrokes, and fistful touches on canvas. Her energetic and intense pictorial field dynamically expands and contracts, evoking greater forces of the universe. Her non-objective imagery is associated with the heritage of the New York School.
Ivana Woscoboinik, Buenos Aires/Miami
Appropriating Kandinsky, the artist outlines quirky drawings-like monochromatic painting on canvas – creating a rapturous interaction between negative and positive spaces. Round, floating forms delineating biomorphic structures related to her personal environment define the pictorial plane in an over-lighted visuality.
Curator’s Voice Art Projects and its curator Dr. Milagros Bello, announces its curatorial participation in “Personal Structures: Time – Space – Existence“, an exhibition organized by the GAA Foundation at the Palazzo Bembo, Venice, Italy, as an official part of the 57th Venice Biennale in Venice.
This art exhibition will be hosted by the European Cultural Centre, and will be held from May 13, 2017 through November 26, 2017. There will be two VIP Preview Nights on May 11th and 12th, at the Riva del Carbon # 4793, 30124, Venice. The venue at the Palazzo Bembo will open daily from 10:00 to 18:00 except on Tuesdays. Entry is free.
Under the title “New Voices from Latin America“, curator Dr. Milagros Bello will present a group of emerging and mid-career artists “who have undoubtedly blended their local, cultural, and historical references with the invaluable heritage of the history of art.”
The curator has selected new voices in contemporary art from Central and South America that currently work in the United States, and that are developing their work based on a mixture of global and regional topics. In her curator’s text, Dr. Milagros Bello says:
“The Latin American continent has been the epicenter of multiple influences, from diverse migrations to changing, sometimes spasmodic and precarious political and economic systems. This group strengthens the creative richness of the region through subjective practices and individual processes. From Modernist approaches to postmodern practices, Latin American art has developed a complex visuality. From emulating the European avant-gardes at the beginning of the 20th century, to now quoting post avant-gardes from the late 20th and 21st centuries, globalism and instant communication through digital media have played a major role in the radical changes occurring in contemporary Latin American art. Still, specific contextual and personal factors shape the core of the works’ production, giving a singular tone to each artist. This group is composed of emergent and accomplished talents in the American art world, particularly in South Florida.”

“I received an Official Invitation from the GAA Foundation to take part in this International Exhibition. I feel honored to have the opportunity to represent a group of talented artists that show the ideological and social power of the Latin American continent.” remarked Dr. Bello.

About GAA FOUNDATION The GAA Foundation is a non-profit organization, founded in 2002 in New York, USA, by the Dutch artist Rene Rietmeyer. Since 2009, the Foundation has been based in Leiden, Netherlands, with a branch in Venice, Italy. GAA has successfully organized eight international exhibitions as an official part of the Venice Biennale since 2011. The Foundation aims to heighten the awareness of important philosophical themes, in particular Time – Space – Existence, and make these concepts more accessible to a wider international audience.
www.personalstructures.org
www.palazzobembo.org
About Curator Dr. Milagros Bello Curator
Dr. Milagros Bello holds a Ph.D. in Sociology with a doctoral thesis in Sociology of Art from Sorbonne University (Paris VII-Jussieu), Paris, France. Dr. Bello has curated numerous contemporary art shows locally and nationally; she is an art writer for Art Districts Magazine and the former Senior Editor of Arte al Dia international art magazine. Since 2000 through 2014, she has taught as professor of art and critical art theories at the Florida International University, Florida Atlantic University, and the Miami International University of Art and Design (The Art Institute). Since 2010 to present, she is the director and chief curator of Curator’s Voice Art Projects in Wynwood Arts District, Miami, FL – a curatorial space that fosters the contemporary arts through curated exhibitions.