In this blog post I will use Johannes Itten’s method from his curriculum at the Bauhaus –The Theory and Practice of Forms – to analyze Wheel within a Wheel 109 – one of my most recent artworks.

A circumference divides two areas of tension within the painting.  The areas contrast from each other creating a positive and negative visual space (marked in yellow.) 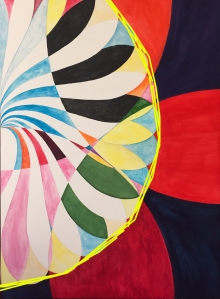 The contrast is achieved with the use of dark solid color blocks alongside the lighter color toned forms.  It is further enhanced through the development of the layout of the composition and its areas of complexity. The intricate and detailed design space is distinguished from the simpler forms that stand adjacent to it.

The artwork has a series of focal points that draw the attention of the observer back and forth between each and in the process achieves the desired effect of a dynamic of motion (marked with yellow lines).

According to the method described by Johannes Itten, the visual space of a work of art can be divided based on variations and combinations of shapes that can include a line, a circle, a square, or a triangle. The visual space and the forms employed, create distinctions and contrasts – both positive and negative spaces.  Areas of tension in the design are identified by the observer, when the focal points are relatively similar in strength. The eye of the observer will then tend to alternate from one to the other to produce a sensation of movement.

In my next post, I will continue this exploration and artistic analysis as I introduce more of my artworks.

2 thoughts on “Analysis of an Artwork”